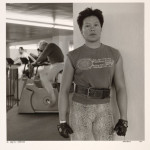 „Riese“: „Robert Giard started photographing lesbian and gay writers throughout the United States in 1985 and, by the mid-90s, had amassed over 500 author portraits, capturing some of the era’s most voices, such as Alan Ginsberg and Dorothy Allison. Giard wanted to document the existence and triumph of these marginalized people who worked so tirelessly within a society largely ignorant to or resentful of their influence.

Before approaching an author, Giard would immerse himself in her or his work. Then, after ‚a period of personal exchange and contact,‘ he’d arrange to travel to wherever the author wanted their picture taken (most charged their homes). 182 of the portraits appear in Particular Voices: Portraits of Gay and Lesbian Writers. …“ Read more … Weblog