The emergence of intersectionality and the politics of difference within feminist theory have long critiqued the notion of a shared political ‘sisterhood’, yet the affective and ethical dimension of relationships between women requires further exploration. Whereas the trope of the mother-daughter relationship dominates feminist theory, comparatively little work has conceptualized the significance of horizontal relationships between women. Much feminist research has shown how central female ties have been to sustaining feminism within and beyond activism. Yet the depth of the (dis)affections between women does not necessarily translate into feminist transformation. This forthcoming conference asks how the much-contested notion of sisterhood requires redefinition for 21st century feminist politics and how the contemporary ethics and aesthetics of sisterhood could be reimagined. END_OF_DOCUMENT_TOKEN_TO_BE_REPLACED 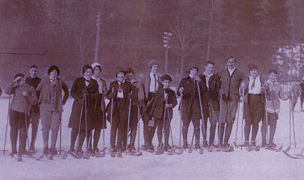 „Environmental history goes through the belly“, said once Donald Worster, but not only that. The balance between the human bodies, their basic functions and needs (including spiritual), and the well-being of other life forms is a central issue of societal and environmental resilience. As such, it has always been an object of regulation and control on one hand, or a measure of catastrophes on the other. Bodies have always been both – physical realities and metaphors, objects of desire and of control. They produce and consume, devour and get consumed, feel and think but also exert calculated control over other human and non-human organisms. The failure to manage the needs of societies and environments results in catastrophes, the consequences of which are measured first and foremost through and by bodies. Read more and Source …

Berkshire Conference of the History of Women 2014: Histories on the Edge/Histoires sur la broche (Web)