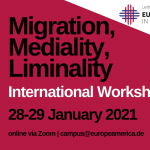 How do media shape the ways in which migrants can represent the experiences of their migration? What are the communicative possibilities of a given medium? What are its pressures, what are its limits when it comes to representing departures, journeys, arrivals and searches for belonging in the country of destination? Do these experiences exist prior to and independent of their medialization, or are they always the result of the meaning-making activities enabled, structured and shaped by the communicative pragmatics of the media in which they take place? If the latter is the case, can we establish a connection between the medial possibilities and limitations of the genre used for the representation of migration experiences, and how the migrants represent them? Is liminality not only inherent to the experience of many a migrant itself but also inherent to the media they use to articulate it?
In 19th-century emigrant letters, for example, a strong sense of the writers’ frustration with the limits of the letter as a medium for communicating migration experiences surfaces time and again. Today, Whatsapp messages and cell phone videos promise a greater range of communicative options to represent migrant experiences in their ambivalent complexity and to re-create communality with people left behind. Yet, also these media have their limits and are unable to communicate migration experiences in their fullness. There is always something that cannot be communicated, a rest left unsaid, and we hypothesize that the shortcomings of the media used to represent migration experiences constitute an integral part of migrant liminality.
This workshop is conceived as a space of intensive exchange and joint discussion, based on the close reading of textual and visual (self-)representations of migration experiences ranging from departure, border crossings, transit to arrival and new searches for belonging. The workshop will address three different media of self-representation: letters and life-writing, fictional writing, and visual testimonies. The speakers will embrace a longue durée approach, discussing the mediality of migrant liminality from the 19th century until today. One of the main concerns is the question of continuity and change in the patterns of representation of migrant experiences as conditioned by the media used.
Program (all times are CET)
Thursday, January 28
14.00 | Opening and introduction: Ulf Brunnbauer, Volker Depkat, Sabine Koller
14.30  | Panel 1: Writers and their Itinerant Experiences