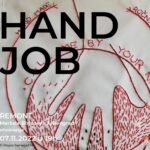 The exhibition HAND JOB is a research project aimed at mapping, contextualization and critical analysis of the use of embroidery as an artistic medium in the art scenes of the region of southern Europe. Who are the authors who actively work in embroidery as an artistic medium and why in it, what kind of visual expression is enabled by the embroidery technique, is there a political / emancipatory / feminist potential of works created in this technique, etc. are some of the questions that would be answered by the exhibition. By selecting six artists and one collective in one place it would gather and present the variety of topics and techniques that accompany this medium.
In the region, embroidery was a mandatory female job and was learned from the earliest childhood. It was an indicator of social and material status, age, regional and national affiliation. At the end of the 19th century, it became part of the primary education of female children, and later secondary, high school and vocational education. After the Second World War, handicrafts, i.e. knowledge of embroidery, were reduced to a household. However, a deeper analysis of this medium, its performative aspects, the context in which it is created and the motives / themes it depicts, reveals completely new strata of its meaning and cultural interpretation.
Reading the graphic novel by Iranian-French author Marjana Satrapi called Embroideries, as well as some of Svetlana Slapšak’s articles such as Woman and Employment, we get the impression that embroidery is not just a physical threading through the canvas / leathter, but it creates various a different discoursive dimensions such as femininity and feminism, resistance, the value of informal conversation, parallel histories, etc. The power of embroidery lies in its ability to combine culturally contradictory concepts, such as private-public, pleasure-imposed work, deft hands-smart head, patriarchy-female emancipation, old-fashioned-modern, individual-collective, art-craft, etc. In addition to having a therapeutic effect, its essential characteristic is that it can also serve as a kind of historical archive of marginalized groups, i.e. a representative of unheard voices. Starting from the claim of Rozsika Parker that a woman who embroiders is not seen as someone who creates art, but rather as an expression of femininity, with this exhibition we want to abolish prejudices against the medium itself as traditional, repetitive and backward, while on the other hand we would present the discursive potential it carries.